Windows 11 is now available. You don’t have to upgrade just yet.

Despite informing us that Windows 10 would be the final operating system developed by Microsoft, the company released Windows 11 last week. You can upgrade to Windows 11 or replace your PC with a new one at any time. But I wouldn’t rush, and here’s why…

Since the release of Windows 10, Microsoft has made gradual changes to their operating system, issuing upgrades every half-year or so. The most of the upgrades were small, with only a few tweaks here and there. Except for the time it took to install those updates, which could take several hours if you’re a regular user, you probably didn’t even notice them if you’re a regular user.

However, Windows 11 has arrived six years later, with a new style that is quite different from Windows 10 and incorporates elements from MacOS, iOS, and Android.

Windows 11 is an attempt to modernize Windows in light of the fact that many people now work from home, utilize several devices, and rely on online communication and collaboration.

Most of you are probably unaware of Windows 11 or don’t care about it. However, we’ve already had a few customers ask about installing Windows 11 on their machines, so you’re likely to come across it sooner rather than later. However, there is no need to haste.

Microsoft has stated that it will continue to support Windows 10 until the end of 2025. It will not include any new features, and the majority of updates will focus on security and bug repairs. People will have the choice to determine whether or not they want to upgrade if he continues to support them.

In any case, your existing PC is unlikely to be able to run Windows 11 officially. If you buy a new computer soon, it will almost certainly come with Windows 11. We’ve been using it for a few months (beginning with a pre-release beta version) and it appears to be working fine, but there are always “buts.”

A New Appearance, a Worse Taskbar

With softened corners and varied levels of transparency, Windows 11 is more appealing. In some ways, it reminds me of Windows Vista, one of Microsoft’s worst operating systems ever.

The Taskbar is the most significant change in Windows 11. Instead of taking up the entire bottom half of the screen and aligning everything to the left, it now resembles the MacOS dock, with buttons in the centre. You can, however, move it to the left if necessary.

The majority of the Taskbar’s functionality has vanished. We’re hoping that Microsoft will fix it with future updates. Its height is limited to one row, which is inconvenient for individuals who want to have a lot of windows open. It is not possible to move it to the left, right, or top of the screen. You can no longer drag files from your desktop or file explorer to programs on the taskbar to open them.

It’s no longer there if you utilized the search box or icon. You must instead access the start menu. Additionally, the search results are displayed in Microsoft Edge and are powered by Bing. Even if your browser is set to search Google, Bing will return results…

Many important functions were displayed when you right-clicked on the Taskbar. They’ve all vanished at this point. Instead of right-clicking anywhere on the Taskbar, you’ll have to right-click the Start Menu to access Task Manager.

Microsoft Teams is now integrated with Windows 11, but strangely, it does not support Microsoft 365 work accounts. You’ll have to download a separate Teams client instead.

The most useful programs are displayed in Windows 11. There is an extra click to do if you need to see different programs. It also displays the most recently opened papers, which I find to be really useful. 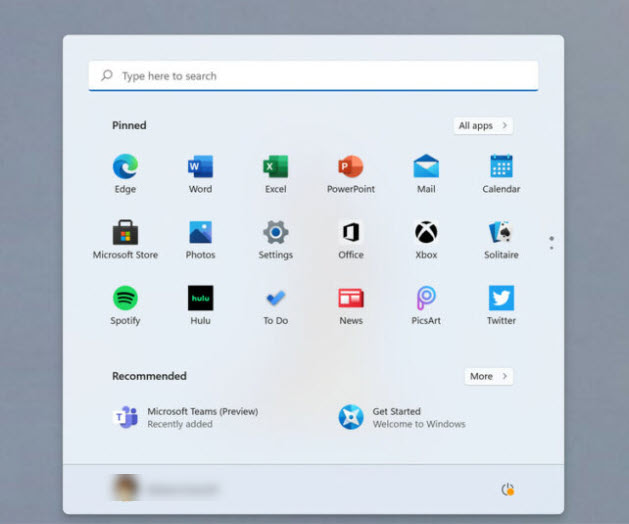 The context menu (right-click) in Windows 11 has been made a little easier to use. Instead of presenting all items, it only shows the most frequently used functions and conceals the rest in the “Show more options” section. Icons represent commands like rename, copy, paste, and delete. It takes some getting accustomed to, but it’s a good system.

Other Options and Settings

More settings from the old Control Panel have been moved. It appears to be new and simple to use, with quick navigation to subcategories. The grouping now makes more logic, and I’ve noticed that I’m not using the previous Control Panel as often.

The size and frequency of updates were two of Windows 10’s main annoyances. Before you restart your computer, Windows 11 now displays how long it will take to install updates.

Multitasking is an area where Windows 11 shines. When you hover your mouse over any window’s Maximize button, Windows 11 will allow you to arrange your windows in almost any configuration you choose. You may still use Windows + Left/Right as a shortcut.

You can also build virtual desktops to keep work-related windows and tabs separate from personal windows and tabs, for example. It also makes it simple to keep your boss (or partner!) from seeing what’s on your screen.

Microsoft account is required to utilize Windows 11 Home edition. It isn’t necessarily a terrible thing. Microsoft lets you sync your settings across all of your devices. All of your bookmarks, passwords, and history will be synchronized with other devices if you use Microsoft Edge as your browser (which we highly recommend).

Microsoft also provides a limited amount of storage in OneDrive, which allows you to sync your documents, photos, and desktop to the cloud. It won’t take the place of backups, but it’s better than having none at all.

In the End, Is It Worth It to Upgrade to Windows 11?

Keep in mind that Windows 11 is still incompatible with the majority of modern machines. According to our data, that covers over 90% of the PCs and laptops that consumers send to us for repair.

You can stay using Windows 10 for another four years if you are content with it and don’t want to learn something new. By that time, Windows 11 will be standard on all new PCs, and you’ll have no choice but to upgrade.

If you’re a power user who spends a lot of time on your computer, Windows 11 is a must-have. Please don’t upgrade before a deadline for a college paper or a business presentation!

Windows 10 users can upgrade to Windows 11 for free. While your machine may be capable of running Windows 11, you will most likely have to wait a few months before receiving the upgrade. This allows Microsoft time to fix certain flaws, and believe me, we’ve seen a lot of them!

If your computer is more than four years old, it is unlikely to run Windows 11. You can find out if it’s compatible by using the WhyNotWin11 program. We were able to upgrade several business-class laptops to Windows 11 compatibility, but these are the exception rather than the rule. There are a few ways to get around the system requirements check, but we don’t suggest it. If something isn’t broken, don’t fix it.

Why did my antivirus software fail to detect a virus on my computer?

How to tell if your computer is damaged by water

Do you ask too much of your computer?

Which Web Browser Is Right for You: Chrome or Microsoft Edge?

You Can Still Enjoy New Technologies Despite Your Age; It Is All in Your Mindset